A downloadable game for Windows, macOS, and Linux

Entry for the Haunted Hunting Jam.

This is the complete version. There are no updates planned.

A really nice sequel to the original game.

I played through becoming prey 1 a little while back and really enjoyed it, and I've got to say you really raised the bar with the sequel!

This game has so much more to it than I thought it would! Multiple levels and story, a levelling up system based on collectible currency (RE4 style), and even bonus levels and multiple endings!

Honestly such great work, really drew me in and had me on my toes!
(I got a little moody towards the end of the video, but that wasn't down to the game I just ran out of time to record that day and couldn't get ending A, so don't take that seriously)

A* developer, can't wait for more!

I didn't take it badly. Your frustration was very valid, and has been shared by many.  I feel it's a failure on my part as the dev that you weren't able to get both endings. I didn't convey at all that head shots do double damage, and conveying info like that will certainly be something I'm more midful of in future projects.

The game has your progress saved, so if you're itching to see the A ending for personal curiosity,  armed with the knowledge to aim for the head, you should be able to beat them!

I felt like I was playing COD mobile, because I played in third-person shooter mode, but I was hunting coyotes... For fun lol... Nice game, mate! :)

Absolutely amazing! The upgrade system, the gameplay, the visuals... I can't believe the first chapter was merely a short walking simulator (it was still great though).The final level was just wicked, unexpected and weird... In the end, I love how this game still doesn't make it clear whether our heroine is just insane and seeing things or all these happenings are real...

It's great to hear you enjoyed it!

Is the game finished and needs no more updates?

That is correct. I put it in the description just for you, friend. ^^

Thanks for your kindness!

Great game and definitely fun. This is a nice improvement over the original.

Here's my channel for other games I have played. http://www.youtube.com/c/Levont

Fantastic little game, and a huge improvement on the already-good first game. This game is essentially what happens when someone takes the best bits of Resident Evil 4's gameplay, uncaps the upgrade system to allow your stats to hit absurd levels, and lets you go nuts on a hoard of demonic coyotes.

I had a ton of fun sneaking around at the start and carefully sniping coyotes from as far as possible, knowing alerting even one could be a quick death. I had even more fun by the end with lots of upgrades, where I was sprinting around all over firing a crazy-powerful chaingun that coincidentally looked and sounded like an antique winchester, shrugging off a dozen coyote bites without even slowing down.

This game has some serious love put into it. Great gameplay, a fun concept, a neat little horror story to tie it all together, and the design of it is focused on being fun to play first and foremost, instead of being fixated on being spooky/artsy at the cost of playing like crap as many horror games do. I got an entire evening's worth of fun out of a game I expected at most 10 minutes of entertainment from, which is one hell of an achievement in terms of making a good game IMO.

I especially liked the aiming system that you made by building on BP1's flashlight mechanic, makes it more complicated to aim over long distances and adds to the panic when you're trying to fight off several coyotes up close. The way Barbara's upper half turns when near the walls and trees due to collision physics is a really neat detail. The coyotes approaching more slowly if they heard you walking instead of running was a nice touch, too. Bonus Level 1 using BP1's map was the cherry on top of it all.

I highly recommend playing through the first time slowly with no upgrades, letting the silence creep you out and getting Ending B by following instructions for the proper horror experience. Then, start upgrading your gun stats as much as you can, put on your personal favorite 90s FPS soundtracks, and go hog wild like you're playing DOOM on Ultra Violence until you can finally take on the big lad in level 4 and "win" to get Ending A.

I'm eagerly looking forward to BP3 if you're planning on making it. If it improves as much on BP2 as this did on the original BP, it's gonna be amazing. Hell, I'd even be happy with just more geriatric coyote genocide simulators, since this was such a blast to play.

P.S.: I ran into a few harmless, funny glitches while playing, I realize they won't be touched since this version is final but they were entertaining so I'm gonna list them anyways. Barbara would occasionally launch into the air and come down again with no issue if I ran down a steep slope, like the one at the start of level 1 and one of the cave entrances. Live coyotes sometimes got stuck on dead ones' corpses, running super slowly or in place due to the blockage. If I was too close to a wall when a coyote let go after latching on, it would more often than not land on the wall, and start glitching up it in an unkillable state while looping its run or attack animations before blinking out of existence, which was a hoot. Also, I figured out how to walk on the walls, by climbing the ridge and then go over the edge in some spots, which lets you cheese the coyotes' pathfinding easily if you want to.

I'm absolutely ecstatic over this comment. It's pretty much exactly how I hoped it would be received. Thank you!

I was worried that no one would want to put the time in to get ending A. I'm very happy to hear I was wrong. ^^

I had the Barbara launch happen to me once or twice while testing, and noticed alot of the other hiccups you mentioned, but the fixes weren't obvious, and they didn't break the game, so it ships!

As for the future of the series, I do think there will a BP3 eventually, as there are still alot of things I want to do with the IP, but for now I'm going to work on something else. 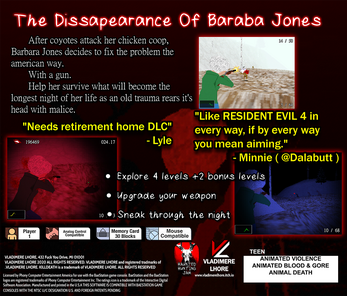